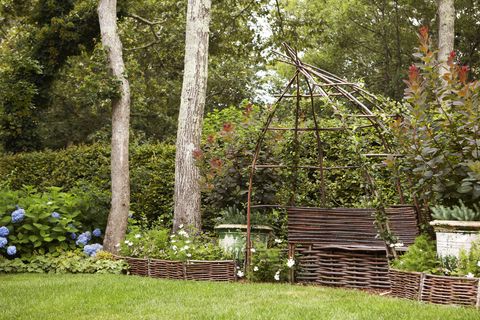 Why fence the garden?

The main reason a gardener will fence is because we aren’t the only ones who like having fresh produce! Every animal in your neighborhood will want some food too and then all your hard work can be destroyed literally overnight.  That is why a deer fence is so critical to the success of your garden.

Is it possible to grow food without a fence?

Of course. But it’s a gamble every day. I’ve heard many of the alternatives: guard dogs, sprays, fishing line, and even peeing around the perimeter. These methods may be effective for a time but animals are smart and will eventually catch on.

The good news is you can protect against most animal predators with a fencing. Even though it may cost more initially, the fence will pay for itself in time as you save money by growing your own food in the garden. You can sleep easy every night knowing you are prepared against animals and I’ll tell you first hand it’s worth it!

I’ve gone through four different types of fencing over the years and I’ve learned a lot about what traits a fence needs to be effective. Below you’ll find 6 tips to create an animal proof garden fence.

#1 Make sure it’s tall enough to keep animals out

While making your fence tall enough may seem an obvious tip, the exact height you need to keep certain critters out varies. The main reason you need a tall garden fence for most of the US is because of deer.  Here is my experience with keeping deer out-

My first garden fence ever was 3 feet tall (see above photo). I used the fence that was already existing on my property. We saw deer often but I had never seen one hop the fence so I took a risk.

The remaining two years we lived there, I stayed lucky and never did have a deer cross the fence. At our new house, the garden was going right where I had seen tons of deer meander in and out of the yard.

I wasn’t going to take a risk so we built the fence eight feet tall! I built it that high because I had read about stories of deer jumping over six foot fence on the internet.

A few years later we built another fence in a different area of the yard. The next fence was much larger and to save money we didn’t go as tall.

It’s about 5.5 feet tall and we’ve never had a deer even attempt to hop the fence. We do have heavy deer pressure and I still see them outside the fence all the time.

What size fence is high enough for you? That depends on several factors. How big are the deer in your area? Do you have buffer area around the outside of your garden?

Deer have been known to jump a six foot fence but they won’t usually jump that high if they perceive it to be a wider distance to cross. In my own garden, I have flowers and shrubs in a four foot border surrounding the entire garden which makes it seem like a bigger area to cross.

Chances are you have some sort of small animal who wants to eat all your hard work. There are voles, rabbits, moles, armadillos, squirrels, mice, gophers, skunks, raccoons, and woodchucks to name a few. Some of these animals love to dig under a fence to get access to the food.

For my eight foot tall fence (scroll to the very top to view), we used cattle panels and then chicken wire around the base. Everything was buried about two inches but it wasn’t deep enough. We had a very determined armadillo dug under the garden fence and destroyed almost everything I had growing.

When building our next fence we dug a 12 inch trench using a trencher and some of it was by hand because of our rocky soil. All the fencing was buried a foot deep. The result? We’ve never had an armadillo cross into the garden area. Success!

#3 Use hardware mesh for the base of the garden fence.

As expensive as it is, I believe ½ inch hardware mesh is the best method to keep small animals from entering the garden. (If you have found something similar for cheaper please let me know in the comments.)

This material is usually paired with a tall fence to keep out large animals. Chicken wire and one inch wide fencing wasn’t enough to stop rabbits in my garden and won’t stop voles either. I would bury the hardware mesh 6-12 inches if your dealing with voles, gophers, or moles.

If you have mice, they can fit through a space as small as the diameter of a pencil. You may try using traps or a cat instead of fencing to keep them out.